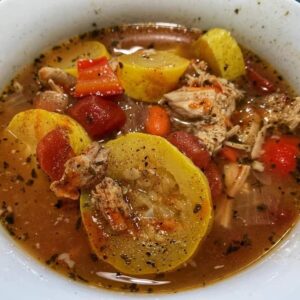 HOW TO MAKE CHICKEN VEGETABLE SOUP

This simple recipe for homemade chicken and vegetable soup can be prepared in the slow cooker or frozen for later use. You may use chicken thighs, chicken breasts, or even chicken from a rotisserie or leftovers to make this dish! In all honesty, this is the best freezer meal I’ve ever made. I prepare it in large quantities and store it in the freezer to have quick lunches that are also good for me throughout the week.

You can serve it on its own since it provides such a good foundation, but there is enough broth to allow for the addition of things like rice, tortellini, macaroni, potatoes, and more! When I reheat the soup at a later time, one of the things that I like to do is alter the serving sizes even though I froze it in its original form.

In my take on the classic, the chicken is first seared in the soup pot. This provides a delicious golden crust on the outside, which not only makes the dish more delicious but also improves the texture. In addition to this, it produces a beautiful golden fond on the bottom of the soup pot, which eventually makes its way into the broth and makes the broth much tastier. It is not even necessary to cook the chicken all the way through; it will continue to cook later while it gently simmers in the soup, which guarantees that it will be tender and juicy.

TO SEASON THIS CHICKEN SOUP, I INCLUDE:

To begin, make sure the chicken is completely dry before seasoning it with salt and pepper. On medium-high heat, heat the olive oil in a 4.5-quart soup pot.

After adding the chicken, sear it for approximately three minutes on each side, or until a crust of golden color forms. (Don’t worry if the center isn’t completely done; it will continue to cook while it simmers in the soup later on.)

Take the chicken out of the dish, and put it to the side. Ten minutes later, cut it up into cubes or shred it.

In the same pot, over medium heat, butter should be melted. To “clean” the bottom and sides of the pot, use a silicone spatula to scrape it.

After adding the onions, carrots, and celery, let them cook for five minutes so that they become more tender.

Add in the garlic, then add the Worcestershire sauce, the spicy sauce, and the spices. Give everything a good stir.

After that, pour in the chicken broth. Bring to a boil, then lower the heat to keep it going. Add the chicken and any juices from the dish to the soup and cook, uncovered, for 15 minutes.

Mix in the frozen veggies. Continue to boil with the lid half covered for another 10–15 minutes. Then serve it immediately!