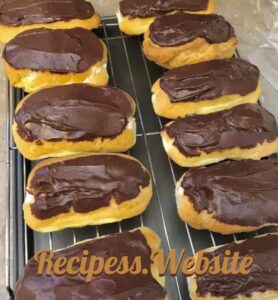 This chocolate eclairs recipe is a classic that has been tried and tested in my kitchen many times. The profiteroles are filled with cream and covered with delicious dark chocolate, and they’re created using light and fluffy choux pastry, which is also used to produce other desserts like macarons. You can enjoy one of these wonderfully gooey eclairs for less than 250 calories, making them an excellent choice for anyone looking for a lighter afternoon treat or dessert. Cooking chocolate in this recipe is dark, but you may use white or milk cooking chocolate instead.

Our chocolate eclair recipe gives excellent results when compared to store-bought versions, and they’ll be a welcome addition to a luxurious afternoon tea party.

It’s important to note that you cannot freeze these eclairs after they have been filled and topped. However, you may freeze the choux pastry fingers on their own for up to three months if they are not filled. After defrosting, crisp them up in a hot oven for a few minutes, then set them aside to cool before filling them.

– FOR THE FILLING, I ONLY USED 3 SIMPLE INGREDIENTS:

– AND TO PREPARE THE TOPPING, YOU’LL NEED:

• Step 1 – Combine the butter and 150ml water in a saucepan. Heat the pan over medium heat, stirring occasionally, until the butter melts. Increase the heat to high and bring the mixture to a boil.

• Step 2 – Remove pan from heat, immediately add flour, and whisk mixture until it forms a ball and begins to pull away from the edges of the pan. And allow at least 10 minutes for the mixture to cool before adding the eggs one at a time.

• Step 3 – Now, you need to transfer the dough into a piping bag equipped with a basic piping tube. Pipelines of the mixture onto the prepared baking sheets and sprinkle with cold water; bake for 15 to 20 minutes in the center of the oven, switching the position of the trays if the top trays begin to brown more quickly than the bottom trays.

• Step 4 – Remove the éclair trays from the oven. Each éclair should be pierced with a skewer to let the steam escape, then returned to the oven for a further 5 to 7 minutes, or until crisp.

• Step 5 – Remove the baking pans from the oven and place the éclairs on a wire rack to cool. Allow them to cool fully before handling. Cut one edge of each éclair and use a teaspoon to scoop out any soft filling in the centers.

INSTRUCTIONS TO PREPARE THE FILLING:

• Step 1 – Bring the cream to a boil in a medium saucepan, then pour it over the chocolate after breaking it into a large bowl. And stir until the chocolate melts completely, then add vanilla extract to taste. Allow the mixture to cool somewhat before chilling until thick.

• Step 2 – To fill the piping bag fitted with the star piping tube, mix the chocolate filling until smooth and creamy and keeps its form. Pipe a little amount of the chocolate mixture into each éclair, then gently press the éclairs closed.

• Step 1 – Melt the chocolate with soft butter in a pan over simmering water.

• Step 2 – Dip the tops of the éclairs into the mixture, making sure not to get any topping into the filling. This will likely be simpler if you use a pastry brush to apply it. Before serving, let the topping cool.