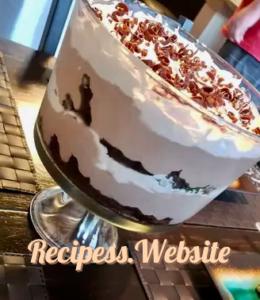 When I was growing up, my older brother insisted on having this trifle on his birthday every year. It’s a family favorite dessert dish that my mother came up with, and the greatest thing is that it’s very simple to prepare! It took me maybe 45 minutes from beginning to end, which is a good period to make a super delicious dessert!! It’s simple, and it’s sooo yummy!

Chocolate Trifle is a dessert that is simple to make, flexible, and visually stunning. It is made with layers of brownies, crumbled cookies, whipped cream, and pudding. Take a handful of store-bought ingredients and transform them into a show-stopping dessert with the instructions below.

FOR THIS CHOCOLATE TRIFLE, YOU’LL NEED THE FOLLOWING INGREDIENTS: