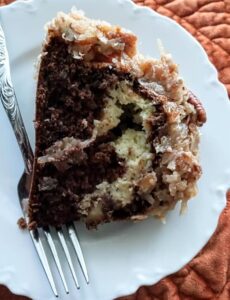 HOW TO MAKE GERMAN CHOCOLATE CHEESECAKE

This German Chocolate Cheesecake is one of the best cheesecakes I’ve ever had! It’s a chocolate cheesecake that has a chocolate crust and a topping made of coconut and pecans, and it’s gooey, rich, and amazing!

I am a huge fan of cheesecake. Since I was a child, cheesecake has been my go-to dessert, and now that I’m an adult, I find great joy in creating new cheesecake recipes. They give off a daunting vibe, but in reality, putting them together is a breeze. They merely need a small bit of your attention. Additionally, there are a plethora of other ways in which the tastes may be combined.

If you’ve tried any of my previous cheesecake recipes, you shouldn’t find this one to be too foreign to you. a method quite similar to that, only the filler will be melted german chocolate. It is my recommendation that you start by preparing the coconut pecan topping first, and then after it has had some time to cool down, you should go on to making the crust and working on the cheesecake filling.

I also baked a little portion of the topping into the center of the cheesecake. You could absolutely add more to the interior, or you could simply put everything on top. l. In any case, it’s fantastic and an absolute must-make for anyone who loves german chocolate cake or coconut and chocolate together. YUM!

TO MAKE THE COCONUT PECAN TOPPING, YOU NEED TO:

Whisk together the egg yolks, milk, and vanilla in a large saucepan until well blended. Add sugar and butter and simmer over medium heat, stirring frequently, for 12 to 15 minutes, or until thickened (nearly pudding-like) and golden brown.

Remove the pan from the heat and stir in the coconut and pecans. Blend well. Wait patiently till it has cooled down entirely.

AND FOR MAKING THE CRUST:

Prepare the oven at a 325-degree. And In a small dish, thoroughly combine the ingredients for the crust.

Fill the bottom and up the sides of a 9-inch springform pan with the mixture. Bake the crust for 10 minutes, then leave it aside.

Wrap the outside of the dish with aluminum foil, then put it aside.

THESE ARE THE INSTRUCTIONS TO MAKE THE CHEESECAKE FILLING:

Reduce the oven’s temperature to 300 degrees.

Using an electric mixer, combine the cream cheese, sugar, chocolate, flour, and cocoa in a large bowl until everything is incorporated (Use low speed to keep less air from getting into the batter, which can cause cracks). Don’t leave any crumbs on the bowl’s edge.

Slowly incorporate the eggs while scraping the edges of the bowl after each addition. Add the sour cream and essence of vanilla. Mix on low speed until well blended.

Put a little amount of the cheesecake filling into the crust. Then, evenly distribute about 1 1/2 cups of coconut pecan topping.

Spread the remaining cheesecake filling evenly in the springform pan. The pan will be almost filled.

Put in oven and bake for 1 hr 30 min. Turn off the heat and leave the cheesecake in the oven for 20 minutes with the door closed.

Leave the cheesecake in the oven for a further 20 minutes, or until set. This chilling method aids in preventing cracks in the cheesecake.

Using a spoon, spread chocolate sauce over the cheesecake and then top with the remaining coconut pecan topping.