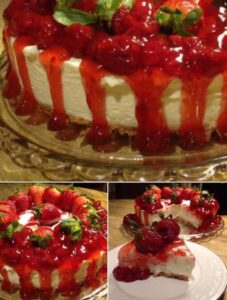 This Strawberry Cheesecake is just stunning. Based on my traditional Baked Cheesecake, which I describe as being mystically rich but light, this dessert is completed with a stunning strawberry topping that tastes just as beautiful as it looks.

You are going to like the way that the sauce gently dribbles down the cheesecake with each mouthful, as well as the way that the filling is creamy and rich, yet it is a little fluffy rather than heavy and thick. Both of these aspects will win you over completely. Also, because I like the biscuit foundation so much, I’ve extended it up the sides…

Since I started making cheesecakes, I’ve used this recipe almost regularly. When we were gone for the weekend with some friends, the cheesecake was the one thing that struck them speechless. And that’s really saying something considering the people I hang out with!

I have said that this recipe for Strawberry Cheesecake is rather simple, but I have not stated that it is a dish that can be prepared in a short amount of time. It is not a difficult process, but it does take some time. I’m going to take you to step by step through each component, and in addition to that, there are images of the process and a video instruction for the recipe.

Oh, that rich, buttery foundation!! Because I like it so much, I construct a whole wall of it for this Strawberry Cheesecake. The biscuit wall’s primary function is to contain the Strawberry Topping in a practical sense. However, even when I don’t use a topping, I always create the walls of my cheesecakes out of biscuits.

FOR MAKING THE CHEESECAKE BISCUIT BASE:

FOR MAKING THE CHEESECAKE FILLING:

Zest of a medium lemon.

FOR MAKING THE STRAWBERRY TOPPING:

To begin, get a springform cake pan of 8 inches in diameter and heat the oven to 160 degrees Celsius (320 degrees Fahrenheit). Butter the base gently and then put a square piece of parchment or baking paper on top of the base. The base should now be in the UPside-Down position.

THE CHEESECAKE BISCUIT BASE PREPARATION:

Put the biscuits in the food processor after you have coarsely broken them up by hand. Pulse till fine crumbs. After that, add in the butter and give it a quick spin until it’s spread equally and looks like wet sand.

Pour into the cake pan that has been prepared. Make a rough distribution of it at the base, then work your way up the walls, using a spatula.

To push the crumbs up the wall nearly to the top of the sides, and to flatten the base, you’ll need something with a flat base and vertical edges. I used a measuring cup for this.

To get the cream cheese completely smooth, beat it for no longer than 20 seconds on speed 4 using a mixer or a beater.

After adding the flour, beat the mixture for 5 seconds on speed 4 until the flour is completely integrated. After that, stir in some vanilla extract, sour cream, sugar, and lemon zest. Beat till just blended.

Add the eggs one at a time, beating after each addition until integrated (about 5 seconds) and then stopping to let the last egg thoroughly incorporate, and pour into the crust.

Bake for 55 minutes. The top should have a very light golden brown color, should not have any cracks, and should be as flat as possible. When you give the pan a gentle shake, the egg should move about ever-so-slightly.

After allowing the cake to cool in the oven with the door cracked, place it in the refrigerator for at least four hours while still in the pan.

Remove sides. To remove the cheesecake from the cake pan, use the paper that hangs over the edge. The cheesecake should then be removed from the paper.

ASSEMBLING THE CHEESECAKE AS FOLLOWS:

Put the strawberry pieces, vanilla extract, sugar, and lemon juice in a saucepan. Stir to combine. After stirring, bring the liquid to a simmer over medium heat.

Simmer the strawberries for ten minutes, or until they break down. Cornstarch should be combined with water, after which it should be added to the pot and stirred.

Cook the halved strawberries for one minute in the sauce to soften them. The sauce ought to have a syrupy consistency; take it off the heat and let it cool. As it cools, it will become more viscous.

After it has cooled, stir it. Be cautious not to make the mixture too runny as you adjust the c