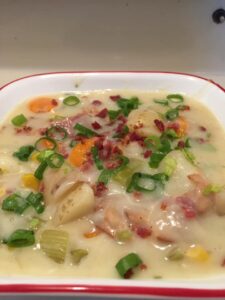 This Slow Cooker Potato Soup is rich, creamy, and savory (without the use of heavy cream), and it’s really simple to prepare in a slow pot. After trying a few various methods with the slow cooker, I came up with one that I believe everyone would like. It involves less than twenty minutes of preparation time (primarily just slicing those potatoes), it is extremely comforting and tasty, and it is made a little bit lighter by removing heavy cream from the recipe (yeah!). However, in contrast to my traditional recipe for potato soup, you will use your crock pot to get this soup to the desired level of doneness via a long cooking process. So, let’s get to it, shall we?

After adding the bacon, potatoes, onion, and 3 cups of chicken stock to the bowl of a large slow cooker, mix to incorporate the ingredients.

After the soup has been slow-cooked for an extended period and is about ready to be served, melt the butter in a small pot on the stovetop over medium-high heat until it is completely liquid.

If you continue to let the mixture cook until it reaches a simmer while stirring it regularly, you should find that it eventually becomes rather thick.

As soon as you’ve blended the milk and flour, pour it into the slow cooker along with the potatoes and stir until everything is incorporated. After adding the cheddar cheese, Greek yogurt (or sour cream), salt, and pepper mix until everything is evenly distributed.

If you want the soup to be even thicker, you may use a potato masher or a big spoon to mash about half of the potatoes while the soup is still cooking in the slow cooker. This will allow you to thicken the soup even more.

Add one to two cups of hot chicken or vegetable stock if you want the soup to be thinner than it already is. First, mix the ingredients by stirring them together, then taste them and, if necessary, add additional salt and pepper.

Serve while still warm, topped with the toppings of your choice. Alternately, transfer to an airtight container, and store in the refrigerator for up to three days. Enjoy it!!