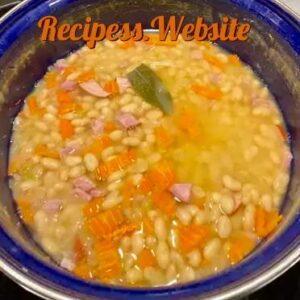 White Bean And Ham Hock Soup is a soup that is cooked with white beans and ham hocks. This soup is also known as ham bone soup, navy bean soup, and Senate soup (the latter of which is known for being thickened with mashed potatoes). Regardless of what you want to name it, there are numerous different variants. Some of them have a liquid consistency and maintain the beans in a more or less whole state, while others transition into a more creamy state as the beans break down in the soup.

In my version, I combine fragrant vegetables, soft whole, puréed navy beans, fresh and dried herbs, and smoked ham hocks to produce a soothing soup that is similar to a stew and is filled with layers of flavor and texture.

This White Bean and Ham Hock Soup is completed with chopped parsley leaves and freshly ground black pepper, and the result is a thick, meaty soup that is indisputably gratifying. On the other hand, I would say that it is even better the next day. Making it in the refrigerator for the night will allow it to significantly thicken up, which will result in a consistency that is much creamier than it was previously.

1 – First, you need to add beans and 3 liters of water to a 4-quart saucier. Season with salt. Over high heat, bring to a boil. Take it off the heat, cover it, and let it sit for an hour. Then leave them aside to dry.

2 – Meanwhile, heat oil over medium heat in a Dutch oven until shimmering. Add the onion, carrots, and celery, and cook, stirring periodically, for about 10 minutes, or until the vegetables are softened.

3 – Add the garlic and cook, stirring often, for about 60 seconds, until the garlic smells good. Put the vegetables in a small bowl that can take the heat and set it aside.

5 – Bring to a boil over high heat, then turn down the heat to keep a slow simmer. Cover and cook for about an hour, or until the ham hocks are soft.

6 – Add the beans, stir, and bring the heat back to a gentle simmer. If necessary, adjust the heat. Cover and cook, stirring every half hour, for about 2 hours, or until the beans are soft and the meat is falling off the bones.

7 – Throw away the thyme and bay leaf. Put the ham hocks on a cutting board and set them aside for about 20 minutes, or until they are cool enough to handle. Using a slotted spoon, move 2 1/2 cups of the beans to a medium bowl that can handle the heat and set them aside.

8 – Once the ham hocks are cool, use a sharp knife to roughly chop the meat. Throw away the skin, bones, and fat. Set aside.

9 – Using an immersion blender, blend soup until smooth. Put the beans, meat, and vegetables that you set aside back into the pot and stir to mix.

10 – Bring back to a gentle simmer, then cook, stirring every so often, for about 20 minutes, until the vegetables are soft and the ham is heated through. Salt and pepper can be added to taste.